“Spiral-shaped Conversation” installation space is built on interaction of vertical (2.5 m x 33 cm) and horizontal (7 m x 7 m) spirals and two reflecting planes (2 m x 1.30 m) covered with soil. The vertical spiral divides the horizontal plane into two parts – an area of light and an area of darkness. The spiral is made of oak and cedar — species mentioned in the sacred texts to describe the Tree of Life.
“Spiral-shaped Conversation” is a metaphor for an endless road to perfection, a road where an infinite number of people walk and meet each other carrying their word … A road, where a new day or a new discovery assembles from odd meanings again and again … A road, where the Light is always present. Its powerful stream lights up the white side of the vertical spiral where a treatise of Nicholas of Cusa ” On Divine Sonship ” is written. It further penetrates the object and fractionizes the dark side that carries the ancient Egyptian text of the Middle Kingdom “Conversation of a Disappointed with his soul (Ba).” Words in these texts are mixed. Meanings arise, collapse and fold in odd phrases, losing the integrity of the original meaning, but rendering polar human states.
A man behind the Spiral partially overlaps the light. His silhouette is like a spirit free from bodily incarnation and staying in the Light – it makes an attempt to translate a universal idea discovered in the Light. An attempt to bring it into the area of darkness, to send it to those who are on the opposite side of the Spiral or even to yourself, another yourself who got into the darkness, becomes a shadow, just a ghostly reflection of ideas. The Light is always present, and when its flow breaks off, “run out” for a few seconds there appears a candle (video) – our inner light that like second breath makes it possible to get up and move on.
This work is also about illusion of isolation that disappears in the area of light when you find out that lines on the horizontal plane are not concentric circles, closed on themselves as it seemed on the dark side, but the spiral and we all are on the same line. But that’s another matter.
Lines on the horizontal plane represent hollows with seeds that symbolize the cycles of birth, death and rebirth. These are the sunflower seeds; a flower that always turns to light. Light turns into darkness; this is objective reality of the road. Light plays with meanings, sparkling and creating bizarre chiaroscuro effects, involving in an endless conversation on an infinite sacred road. All the roads are sacred, as every road has led at least one person to another, to someone very important, to a breakthrough, to the Light… Glasses in the background of the installation are covered with soil that I picked up from my sacred roads and mixed with holy water that was shed rain connecting the Sky and the Earth. 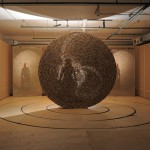 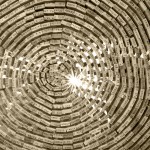 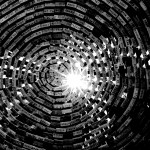 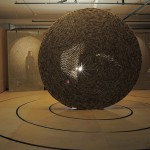 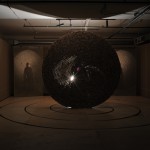 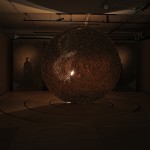 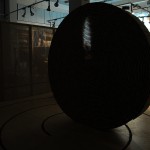 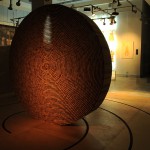 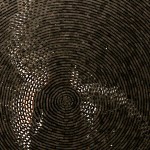