The object ROUND DANCE lies in the Quiet Pine River floodplain in the middle of the boundless Divnogorsk (Wonderland) field and is made of hay from the Divnogorsk meadow. From afar, eight eyes of equal-man size seem to be closed and only when coming closer you can see huge blue eyes turned towards sky. ROUND DANCE is a metaphor of relations between solitude and unity, reticence and openness. This is the idea of uniting people and their power, erasing personal boundaries, the unity of the cosmos and all its parts.

Milk produced by a cow grazing on the Divnogorsky meadow, honey made by bees collecting nectar from flowers on the Divnogorsky meadow and a round loaf baked in Divnogoria are the power of the Earth and the sky of this site called Divnogoria (Wonderland). Each participant breaks off a piece of bread, fills up his cup with milk and takes his two-dimensional circular place. Then we sequentially move from one circle to another taking each other’s places. We make several full cycles, breaking two-dimensional boundaries in a three-dimensional world. All together, we enter the center of the object. We are surrounded by a round dance of a giant boat-shaped blue eyes staring at the sky, in silence we eat the bread with honey and wash it down with milk from the same cow. We are together; we share the same Earth and the same Sky. 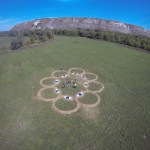 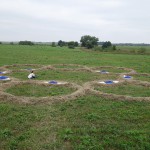 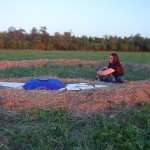 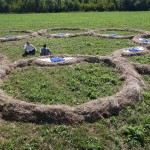