Two straight lines of 220 cm length each shaped like a pile of pressed newspapers. They move in the opposite directions: one – clockwise and another – anticlockwise (past – future). While rotating they align either vertically
or horizontally forming a “minus” or “plus” sings. The movement stops at “plus” and “minus” positions for 30 seconds.
They say that everything happens for the best, but at a certain moment «the best» gradually turns into «the worst» and vice versa. Moreover, it’s impossible to known for sure which is which: the same events may receive opposite evaluation and appraisal. Needless to say that even the Earth’s Poles change their positions from time to time. 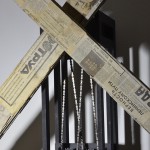 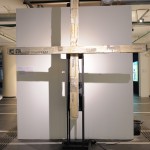